The Paradise City Arts Festival in Marlborough, Massachusetts showcases 170 of the “best-of-the-best” of America’s most exciting independent artists, designers and master craft makers. This March, dozens of remarkable artists were selected to exhibit here for the very first time.

The brand-new exhibitors in this show selected for the Directors’ Picks feature four intriguing new artists, all of whom deserve recognition for their accomplishments. Meet a jeweler from California, a woodworker from Virginia, a sculptor from New Jersey, and a painter from Massachusetts. They all look forward to exhibiting March 18, 19 & 20 at the Royal Plaza Trade Center. 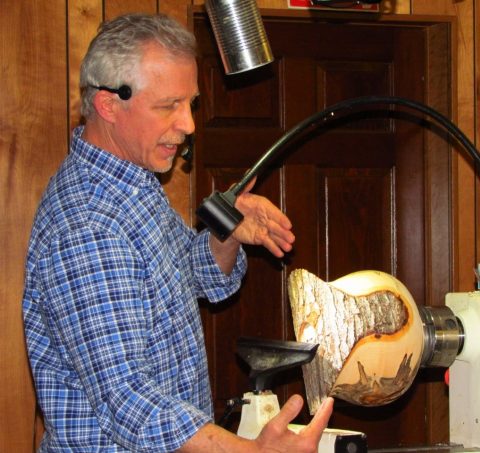 Sorge is a member of the American Association of Woodturners; Central Virginia Woodturners; Southern Highlands Craft Guild NC; Piedmont Craftsmen Guild NC; and Staunton Augusta Art Center VA. He delights in sharing his knowledge and skills with others, and often leads workshops and demonstrations in woodturning techniques. 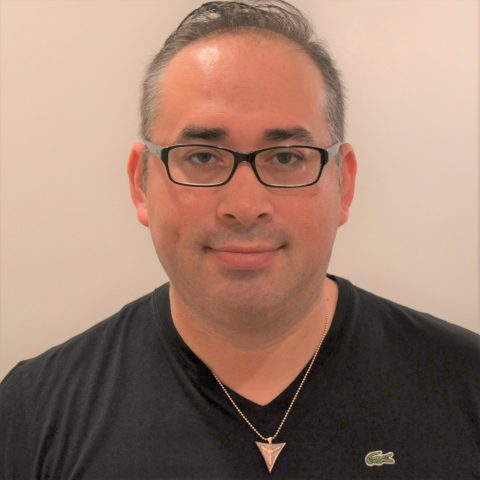 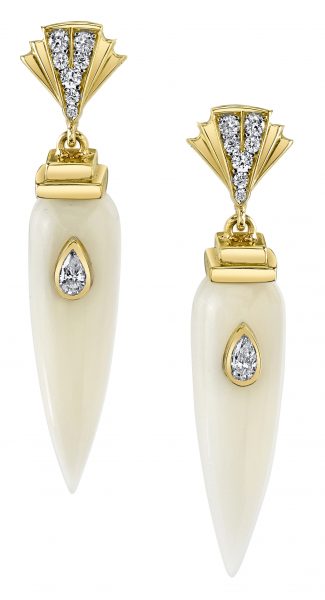 A second-generation master jeweler, David Alvarado pairs luxury jewelry design with ethical responsibility toward our environment. His pieces are all made from recycled metals, predominately gold and platinum, high-grade conflict-free diamonds, and fair-trade gems. But it is his striking use of vegetable ivory from the tagua seed that catches your eye. Just as a gemstone is chosen for its clarity and beauty, each seed is selected for its creamy color and smooth mokume-like grain. Cut, shaped, and polished, the “ivory” is connected to gold and gems using lasers and advanced technology combined with hand craftsmanship.

This Los Angeles artist brings past and future together. He writes, “The Art Deco period is a favorite era of mine for its design and architecture. It was an era that introduced new technology and new places in the world. Now I want to introduce the awareness of biological, organic elements and materials as fine jewelry. I want to see the symbolism of something that affects the world in a karmic sense.” Alvarado’s award-winning, innovative work has been featured in Vogue, Rapaport and In Design magazines. 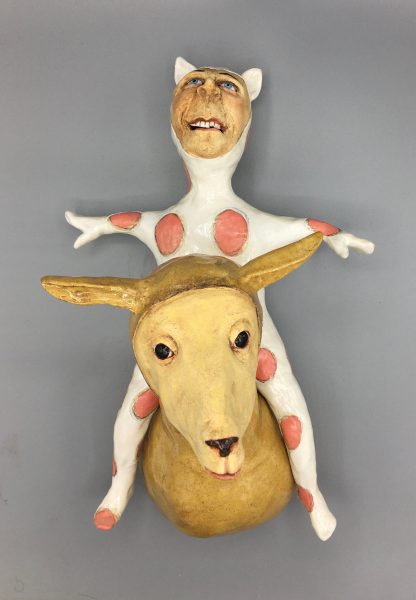 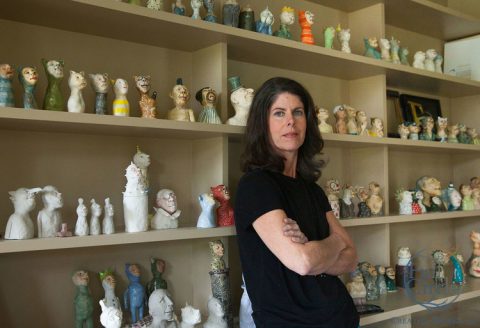 Jeannine Pennell states, “The faces I sculpt are the products of my imagination. They have become an outlet for me to study and express emotions. While some may be dressed in costume, they exist on the brink of reality and fantasy. Each has their own personality and character by which they become exceptional and unique. They do not relate to specific people but are rather the essence of my personal experience.”

Pennell works in kiln fired paperclay, creating quirky, whimsical figures that draw you in. Each figure is hand sculpted and hand painted in underglaze washes, typically fired multiple times to create a gritty, illustrative quality. The first paper clay figures started to appear in 2016 while she sat with her mother during the end stages of Alzheimer’s. She spent every Wednesday with her and created more than fifty figures that year. Over the years she has worked in many types of air dry and oven fired clay bodies, but she has certainly found her true direction in paperclay. She studied at the Arts Students League, NYC and Mason Gross School of Art, Rutgers University. In addition to her sculptural work, she is the owner of Frame of Mind Gallery in Holmdel, New Jersey. 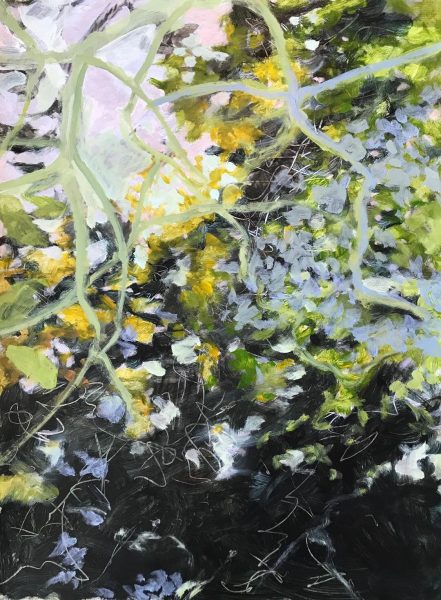 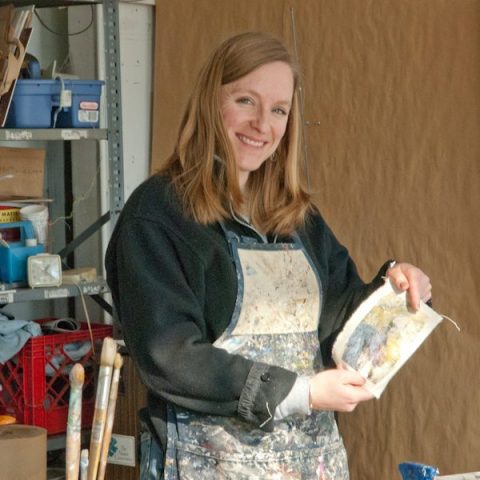 Massachusetts artist Cheryl Clinton’s paintings evoke the moods, colors, and patterns of light in the landscape. After earning her Bachelor of Fine Arts from the Massachusetts College of Art, Clinton traveled to Europe. The waterways of Venice and the surf of Skopelos Island inspired her sense of the natural world. She came back to complete her MFA at the University of Massachusetts in Dartmouth. Her passion for lush landscape eventually landed her in a studio in rural Holliston, MA.

Water and reflection are at the core of Clinton’s recent paintings. Working on this series, she muses, “I wrestled with the image in my mind against what appeared on the canvas. When I was able to slow down and listen, a wiser part of myself suggested play and experimentation would lead the way to fresh work. Stepping out of efforting through a piece, and into the freedom of play, felt risky and uncertain, like walking blindfolded through familiar, yet shifting, terrain. Pouring, dripping, troweling, wiping, and layering paint all take part in my process.” Clinton has shown her images of water and plant life in solo exhibits at the Danforth Museum of Art in Framingham and Tower Hill Botanical Garden in Boylston, Massachusetts. Recent exhibits include shows at Fountain Street Fine Art in Framingham and Boston. Clinton’s paintings are included in corporate collections at Meditech in Massachusetts and New England Bio Labs in Frankfurt, Germany. Her work also headlines numerous private collections throughout the United States and abroad.